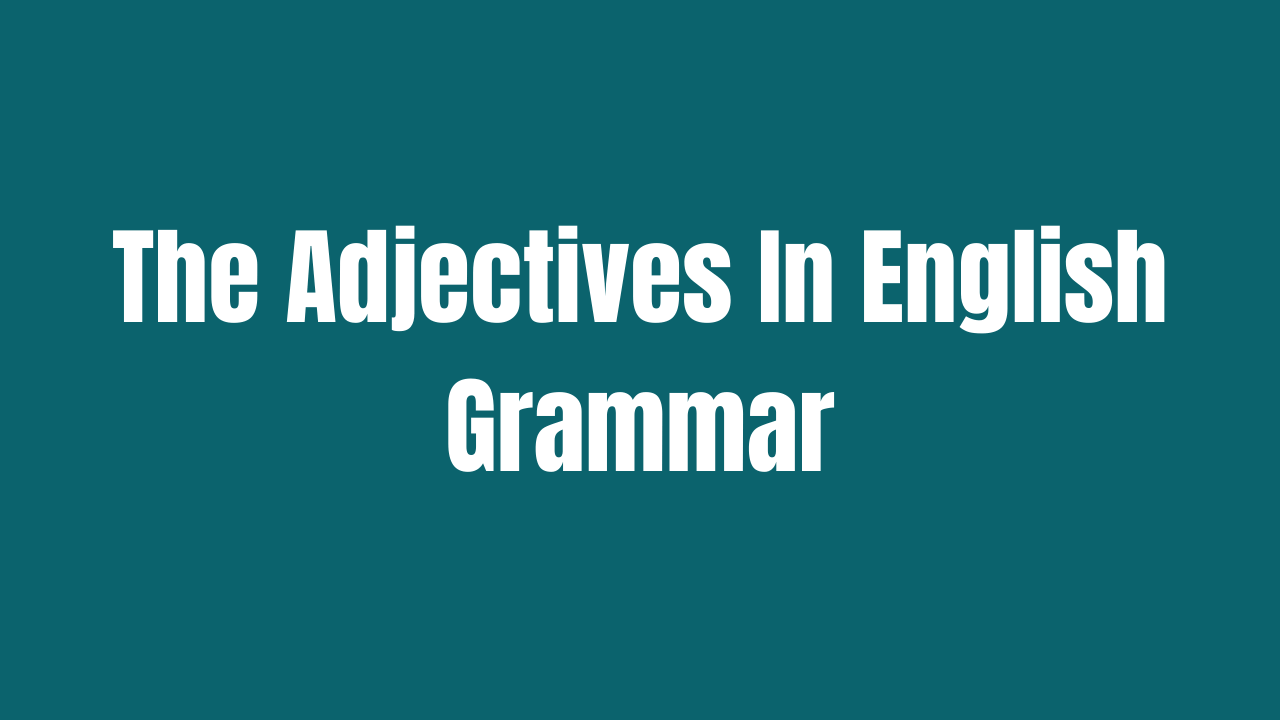 Today we’re going to learn Adjectives It is a really important and very basic concept in English Grammar.
Grammar? don’t be scared it’s okay I’ll help you, my friend.
I remember when I was learning this concept in school, I was confused as well, and the way that I remember this one of my teachers taught me a very easy way to figure this out.
so, Adjectives describes a noun.
so, you’re thinking oh no, how do I remember what a noun is?
I remembered what a noun is,
It like this a noun is three things a person, a place, or a thing.
this is what I remembered it from when I was a child I always say a noun is a person a place or a thing.
Adjectives are always placed before nouns or pronouns.

What is an adjective in English Grammar?

so let’s look at the sentence we have, A big white cat.
Can anyone tell me in the sentence where is my noun? Big a noun? No white a noun? No.
Cat is a noun? Yes so due to looking in this sentence, my cat is my noun.
these words big and white describe what does the noun looks like the other thing.
You have to keep in mind In English when you’re describing something you always go shape, size, and then color, and then the actual noun.
the other thing that’s very important is, In the Adjective, the adjectives always come before the noun.
In these examples highlighted words are adjective

Possessive adjectives in singular form are my, our, your, his, her, its. While for the plural form, we have your, our, and their.

The Possessive adjectives “Your” are used in both singular and plural forms.

If you noticed, all the possessive adjectives come before the nouns.

This and that modify singular nouns. These and Those modify plural nouns.

Interrogative adjectives are used along with nouns to ask questions.

In other words, An Interrogative adjectives describe a noun that is used in a question.

In English, three interrogative adjectives: what, which, whose

For example: “Which hairband do you want to buy?” In this case which is an interrogative adjective that modifies the noun hairband.

They describe a noun in a general way.

In general, Descriptive Adjectives are placed before the noun they are describing.

For example, Pink doll, pink is a descriptive adjective, and the ball is a noun.

Large house, large is a descriptive adjective, and the house is a noun.

For example, The house is small.

House is a subject (is) is a linking verb, and small is a predicate adjective.

In this example, the adjective small describes the subject house.

Another example, “The girl is tired. ” Tired is connected to a girl with a linking verb (is), so it’s a predicate adjective.

A comma separates coordinates. In this, two or more adjectives fall, and it describes the same noun equally.

For instance, I want to buy myself a pink, blue purse. Here we have two adjectives before the noun purse pink and blue both are the same category color that is both are describing the color of the noun purse. So, you either put a comma between them.

I want to buy myself a pink, blue purse.

So, Coordinative Adjectives are of the same category modifying the same noun, and you need commas or and to separate these adjectives.

Quantitative adjectives define the exact or inexact amount of a noun.

For instance, there are three apples on the table. Here three is the definitive Adjective of quantity.

Some quantities are indefinite. That is, they don’t tell us the exact numbers.

For instance, there isn’t much water in the glass. a singular noun follows the word much

A noun always follows the Adjective of quantity.

It is described to the proper name of people place or thing.

For example, I am from America; America is a proper noun.

I am American. American is a proper adjective.

In this context, ‘American’ is a noun and ‘American woman’ is a proper adjective.