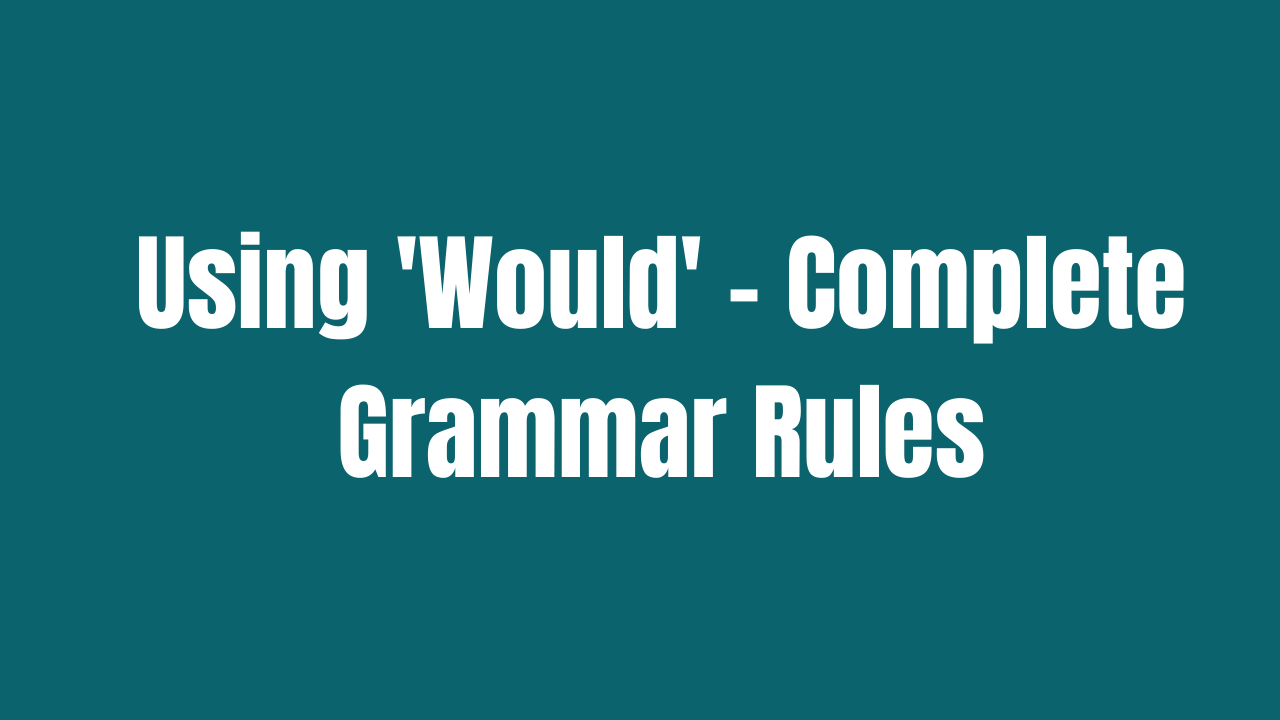 It is an exciting word; there isn’t one specific definition.

Many people confuse, and many assume that ‘Would’ is always used in the past. well, it is not so.

‘Would’ is a model auxiliary verb so, it changes its meaning and

It can fit in the past and present depending on the way it is used.

So, today I’m going to take you through this model auxiliary ‘Would.’

Which is very important, okay.

Using would for Past Habit

The first use of ‘Would’ is in the past tense, When you want to say or you

want to speak about a past habit.

Now let’s a few important things to keep in mind: After ‘Would,’ the verb is always in the present form.

I cannot say, She would danced well. Alright? that’s wrong.

I would read a lot in my college days. (college days ‘that’s in the past and again, the verb after ‘Would’ is in the present, okay.)

Past of ‘Will’ (Indirect Speech)

You know the direct speech is something when we say, you know when the speakers exactly use these words, that’s your direct speech.

The shopkeeper said, “The shop will be closed tomorrow.”

but When we talk about Indirect speech, when you convert the direct into indirect, ‘Will ‘always becomes ‘Would. ‘like this

The shopkeeper said that the shop would be closed tomorrow”.

So Indirect speech Will becomes Would, alright.

Would + Infinitive (without to)

It refers to hypothetical situations in the present and future.

It is a situation that is not the reality.

For example, If I had a lot of money, I would go on holiday. (This is hypothetical.

Do I have a lot of money? No

Using would for Polite Request

We used ‘Would ‘when we make a polite request.

For example, I’d like to ask you a favour. (Now, see here friends I have contracted I’d that’s I+Would, okay)

You can even say, I want to ask you a favour. (Grammatically, it would not be wrong. but yes, If you’re going to be more polite, probably Informal English, probably at your workplace, you always say

I’d like to ask you a favour. if you want to sound more polite)

Another Example, Would you like some coffee? (here, I’m offering someone politely.

I can even say, Do you want to have some tea? (but we used here ‘Would’to sound more polite)

Many people were confused. I apostrophe D (I’d) is I would, or I had.

Because even I had is contracted to I’d.

But I’m going to teach you something straightforward trick to remember when it is Would when it is Had.

For example, I’d like to have some water. (When you see I apostrophe D (I’d) with a verb in the present, it always ‘Would.’)

So, when the following verb is in the present form, it is always ‘Would.’

Another example, I’d gone out last night. ( here, it is I had because it can’t be would here because I always said after Would the verb is always in the present and not in the past participle)

this is the third form go, went, gone.

So when you see the third form, that means this is Had.

And When you see the first form, this is Would.

Using Would rather (express choice/preferences)

For example, I would rather have coffee than tea. (that means I’m making a preference for coffee over tea.