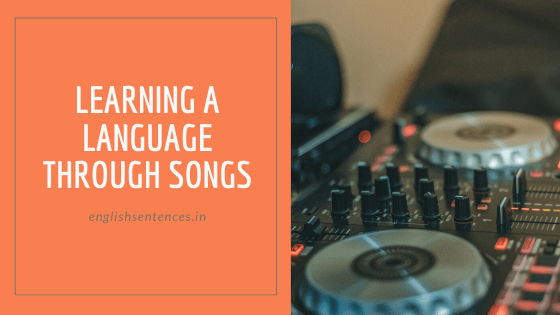 Music and songs are integral to any culture; it is seen as a medium for expressing human emotions. Lyrics connect with every aspect of human life from birth until one’s last breath. Songs rendered in beautiful voices can invoke the emotions of any individual. Human brains generate alpha waves in response to songs and music, which creates positive emotions and rejuvenates one’s soul.

Thus songs create a desire to learn the lyrics, and it’s meaning

Songs are languages of the soul, which can asunder the differences in expressions and bind people by love and passion

Role of the song in learning languages

Audio sales of Bollywood movies like Aradhana, Tezaab, Rangeela, Sholay touched astronomical figures because of their beautiful lyrics and rendition

Romantic songs light the hearts of the couple’s, who wants to portray their love in different ways; for instance, songs from Aradhana

“Mere sapno ki rani kab aayegi tu .” : The queen of my dreams, when will you come.

“Aayi rut mastani kab aayegi tu.” : The season of joy is here, when will you come.

“Beeti jaaye zindagani kab aayegi tu.”: Life is passing by, when will you come

“Mere sapno ki rani kab aayegi tu.”: The queen of my dreams, when will you”

Most of the songs are poetic. It offers solace to broken hearts with analogies. Songs convey the gamut of human emotions, for instance, a soldier positioned in the border yearns to hear words from their loved ones. One song that touched the hearts of soldiers was “chitti ayi hai ,” which portrayed the emotions of a soldier with beautiful soothing words. Songs are the best medium for one to start learning any language.

Learning languages through songs can create a peaceful atmosphere as they convey sensitive emotions with metaphors and analogies. Words do not trigger ill-will and animosity in the listener’s mind at the same time make them understand their mistakes and pave the way for peaceful co-existence

According to Aristotle, words are sounds that become symbols of mental experience through the association with past experiences and the processes of the subconscious mind. As a result, words can both reflect and shape mental thought. By using verbal prompts, he was able to draw out related ideas through the process of association and generate a multiplicity of different perspectives.”

Auditory methods facilitate learning as human minds relax while listening to a story or a story. New words are easily ingested because they are delivered in different modulations and tones. 30 per cent of the population are auditory learners, which makes them learn new languages with ease.

New psychological methods like neuro-linguistic programming can make everyone an auditory learner by tapping into the subconscious levels of the mind.

Songs will inspire people to learn by identifying with their emotions.